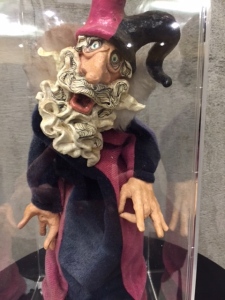 We can’t help ourselves! We just love those old Willie Award puppets (created by the amazing Joan Gratz, whose many other accomplishments can be seen here!)  And thanks to an exhibition organized by Don Horn of triangle productions!, we have grabbed ourselves a picture of another one, currently on display at Portland Center Stage, in the Ellyn Bye Studio lobby! This puppet was one of the very first Willie Awards, presented on this particular occasion to Wendy Westerwelle for her performance as Supporting Actress in Storefront‘s Squirrels, back in 1979.

We remember Storefront so well! What a brave, exciting company it was, to be sure! And how wonderful to be able to take another look. In fact, our thanks are due to Don for not one but TWO Storefront installations right now. The photo of the puppet, and the final two photos on the right, below, are at PCS. The other two (the first two, below left)  are on display at Blackfish Gallery, at 420 NW 9th Avenue. All celebrate the wonder that was Storefront Theatre. Believe me, both locations are worth a visit. Simply lovely. Incidentally, Don will be bringing out a book of memorabilia quite soon (a proof copy is on display in the Ellyn Bye lobby) and  is producing the Storefront Actors’ REVUE: The Babes are Back!! in May of this year. So get out your tissues and prepare for a good weep, for the love and laughter of times gone by.

My own favorite among these pictures (apart from the puppet) is the pink costume, second from the right below, designed by Ron Erickson, from Storefront’s April 1990 production of The Mystery of Irma Vep, directed by Jon Kretzu, and starring David Sikking and Kevin Michael Moore. I remember the show well, and can’t help smiling, even now. The Willamette Week critic at the time (I wonder who THAT was!!!???) wrote about clever direction and accomplished acting, and ended by saying : “Why do two grown men spend whole evenings running on and off the stage, scrambling in and out of costumes and talking to each other in silly voices? Does it make for worthy theater when they do? God knows. But on Wednesday they looked like they were having fun. And so were we.”

Oh, we love live theatre, we old Drammarians at Drammy Towers! And Storefront gave us some of the most lively theatre ever! What worthy, worthwhile, outrageous fun it was!

View all posts by drammyawards